So, as of today 17:00 (German time) Compellent introduced their new Storage Center in version 5. Storage Center is essentially a SAN solution that similar to EMC’s V-Max is based on industry-standard hardware. It’s effectively an Intel-based server with a custom OS that runs from flash memory.

Now then, one of the main technologies used by Compellent in these arrays is something called “Dynamic Block Architecture” or DBA, which basically is a storage virtualization technology that tracks each block in the array independently. Since all metadata contains all relevant information like RAID level, volume and disk location, the data can be stored anywhere. This allowed for features like automated storage tiering or thin provisioning. Zero block reclaim was also an option in the form of “thin import”.

Today version 5 is released which offers the following improvements and new features:

Now, some of these speak for themselves like the support for RAID6 with automated tiered storage, or virtual ports that allow you to share multiple virtual ports on one physical port by using N_Port ID virtualization (NPIV). Some of the others are less obvious so I’m going to look at them a bit closer.

Portable Volume
Compellent stated that portable volume is just that, “a way to move data around”. Primary uses could for example be the initial synchronization between a primary and a backup site that both contain Storage Centers. “Customers don’t want to purchase a ‘big pipe’ for just that first synchronization”. 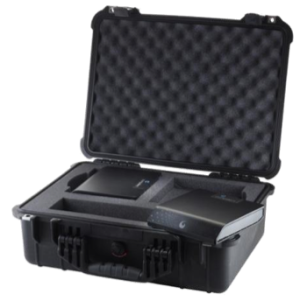 Basically you plug in a portable volume to a controller. That’s done via USB. After that the system copied the data by basically creating a snapshot and synchronizing it to the USB disk. Once that is done you can physically move the data over (there’s even a James Bond style suitcase or “travel container”), connect the portable volume to your second array and the replication automatically takes place. Currently the biggest portable volume is a 2TB drive, but you can combine multiple drives. Filling a drive can take up to around 15 hours, speeds are mostly limited by USB 2.0 connection. Compellent is currently also “looking to support portable FC attached drives”, but I wouldn’t hold my breath for that one in the coming weeks.

Not that spectacular, but this feature allows you to connect cheaper SAS disks to the array. You have a choice between either 450GB drives with 15,000 RPM or 1TB drives with 7,200 RPM. This will scale from a minimum of 6 drives up to 384 drives, where 384 is the current drive limit for SAS drives. Disk shelves are being sold that will offer capacity for 24 disks. For solid state disks and for FC-disks you can have a 1008 drive maximum.

Main focus of this point is the virtualized environment. You can now create groups of servers called “clusters”, that can be moved or configured all at once. As with the default configuration, the LUNs created will be then, and a nice touch is that they have an “OS-aware mapping”.

Basically consistent recovery points from the array. Up to 40 different volumes can be combined in one group, which gives you the option to create groups for the various applications or landscapes within the array. Compellent is looking to provide an alternative to Microsoft’s Visual SourceSafe with this new feature.

So, that’s it for the announcement. Let’s see what this new array will show us in production environments. One small detail I should mention is that Compellent is also looking at implementing FCoE as an interconnect in their arrays, but the jury is still out on when this is going to be launched.